Summary History of the Town 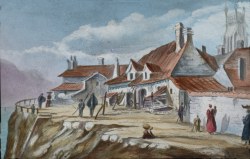 At the time of King William's Domesday records, 1086, there is no mention of the town of Cromer. Instead, we read of Shipden, a town that now lies beneath the sea. In medieval times we read of Cromer, alias Shipden. The town centred on two becks which fall into the sea, the east beck which joins the sea at the natural break known as the Gangway, and the west beck, which nowadays is piped underground, joins the sea close to the pier. Fishermen and merchants plied their trade from the beach below, and sheep farmers keeping their flocks on the hills behind the town.

In 1285 the king granted Cromer a Friday market and a yearly fair of eight days. The church of St Peter and St Paul replaced the two earlier churches, that of St Paul (which was a smaller church on the site of the present one) and that of St Peter (which was already close to the receding cliff edge when the building of the modern church began). In 1565 Cromer is listed as a landing place with a pier, with 117 householders. The merchants traded far afield, and Cromer vessels crossed the North Sea, sailed to the Baltic and even to Iceland and Greenland. 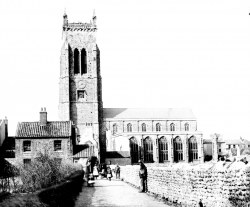 The trading vessels of Cromer continued to land on its open beach until almost the end of the 19th century, when the railways offered a more efficient means of transport. Undoubtedly business had declined over the centuries, with the general decline in the importance of the county of Norfolk as a centre for the wool industry. Fishing continued to be a mainstay of the town, with cod, mackerel and other longshore catches providing a year round return, before the decline to the crab and lobster specialisation of today. Tourism began to be of more importance from the beginning of the 19th century, and it is from that period that the first written guide to Cromer dates.

The end of the war with France provided the opportunity for this influx of visitors. The Gurney family of Earlham Hall were some of the earliest visitors of this sort to the town. The mixture of sea views and bathing, the woods and walks behind the town and the activity on the beach brought those with leisure time and the time to draw and paint to Cromer, including a number of artists of the Norwich school. 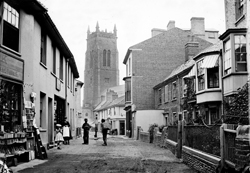 The coming of the railways and the accompanying publicity started by the travel writer and theatre critic Clement Scott - who coined the name Poppyland for the area - led to a further rush of visitors in the final decade of the 19th century. Many of those visiting the town contributed to local prosperity and building substantial houses. Others took the opportunity to develop businesses based on the holiday trade. The great hotels, few of which remain, date from this time.

With the decline of the town after the medieval period, the church itself had fallen into a considerable state of disrepair. The Reformation and the time of Oliver Cromwell's Commonwealth had also contributed to the deterioration of many church buildings. The church windows had largely been bricked up and the chancel had been demolished. Reverend Thomas Gill had resorted to the use of gunpowder for this purpose in 1681. The restoration of the church was undertaken in the reign of Queen Victoria, and it was substantially restored for the beginning of the 20th century. 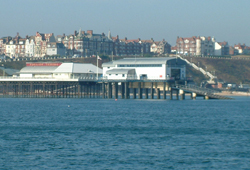 Cromer also became known because of its lifeboat station. Today the offshore lifeboat station is at the end of the pier, whilst the inshore lifeboat operates from the beach. In the 19th century, almost every coastal town or village in Norfolk had its lifeboat. In the 1920s motor lifeboats began to take over from the pulling and sailing boats. The building of the pier-head station at Cromer meant that the lifeboat could launch in almost any weather, and Cromer took over responsiblity for much of the coastline to the east, and in particular for the Haisboro' Sands. The work of Coxswain Henry Blogg and his crew became known nationally, and has been continued by his successors led by Henry 'Shrimp' Davies, Richard Davies, Billy Davies and today's Coxswain, John Davies.

Today Cromer and district remain a very popular spot for visitors. Of course it is not possible to guarantee the sunshine and warmth of overseas destinations, but the summer can offer open beaches, country walks, safe sea bathing and a variety of interesting places to visit. The area now offers a selection of activities, from the local museums, the swimming pool at Sheringham, heritage railway journeys, 'Seaside Special' at the end of the pier - plenty to interest everyone except perhaps those who want to be absolutely certain that they can lie on the beach all day and dance all the night away!