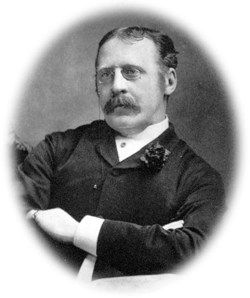 The role of Clement Scott in the story of the Cromer-Overstrand area is well established. He came to the area early in the summer of 1883, produced his first article about the region for the Daily Telelgraph, and went on to make the most of the inspiration he could gain from the area to produce many column inches, the text later often reprinted in book form.

Today his verses are not regarded as the finest poetry of his era and many certainly come close to matching the melodrama of those by his contemporary George Sims. Both produced poems intended for reading aloud; magic lantern producers delighted in producing pictures to go with the verses.

Having said that the verses don't place him in the top rank, that was not the view of his public. Arguably he can be said to be the most popular poet of his time. He was a regular contributor to Punch magazine, where editor Frank Burnand backed and maintained that popularity.

The subject of his verses ranged far and wide, often responding to incidents reported in the national press. In the context of these pages, we must restrict our selection to those with a Norfolk and Cromer connection, sometimes suggested, sometimes overt. The best of his verse was brought together in Lays and Lyrics published by George Routledge and Sons in 1888, in a series that numbered Dickens, Thackaray and Wendell Holmes amongst its other contributors.

If you'd like to more about Clement Scott and his influence, there are three items on our web site to interest you: Poppyland - The Story in Words, Pictures and Music of Clement Scott's Journey to North Norfolk, a one hour documentary DVD, Poppyland in Pictures an album with accompanying text of Sidestrand, Overstrand and Cromer in Scott's time and Poppyland - Strands of Norfolk History, a booklet telling the Poppyland story.

THE LAY OF THE LIFEBOAT

Scott was very familiar with the work of the lifeboats. They occur in a number of his writings. In The Lay of the Lifeboat verse three clearly indicates his knowledge of the lifeboats on the Norfolk coast, with its reference to the 1880 lifeboat disaster at Wells. Most of the crew drowned when the lifeboat capsized outside the harbour mouth.


They talk of battles, and rank and file ; they call the roll, count cannon and loss;
And Tom he wears a corporal's stripe, and brave little Jim the Victoria Cross.
They march to the front with fife and drum, and follow the beat of the regiment's band ;
They see their flag as it waves, and hear the jolly old colonel's clear command.
But there's never a sound in the battle at sea, but the howling storm and the scream afar;
And it's only duty points the way when the ships break up on the harbour bar.
It is dark unto death on the midnight sea, and darker still on the sleeping land ;
But only women are left on shore to cry, "They're off!" when the Lifeboat's manned.

Certain risk and a chance reward - this is the tale that the Lifeboat tells.
What was their prize but the lives of men, those splendid fellows who died at Wells?
Love and pleasure were theirs at home, danger and death they faced at sea;
Their lives were swallowed in waves of Fate when the men they hurried to save were free.
Out they went in the terrible storm, hurricane hard on the Norfolk coast;
Women they weep, as women will do ; but never a sailor quits his post.
Seizing the oar, the rocket, and rope, out they went from the sheltering land
Never again will they wake to hear their comrades shout when the Lifeboat's manned.

Gentlemen all, when the storms are out, the roof-tree shakes, and the windows rattle,
Just think a little of ships at sea, the wave's attack, and the sailor's battle.
You close the shutters and bar the door, in cosy homes of the sheltered city ;
You give one sigh for the Lifeboat - yes, and you offer her crew a grain of pity.
But, on my honour, I'd like to know if pluckier men in the world exist
Than those who buckle the lifebelt on, when wives are left and the children kissed.
So again I ask, are your glasses charged? will you send a cheer from the friends on shore
To the men who go to their death at sea, and do their duty? - men can't do more.
Hope departs when the land is lost; love is blown from the rocks and sand.
Ready to die is the motto of men - and this is the reason the Lifeboat's manned.

The previous verses were in the 'Lays' setion of the book. The following are all in the 'Lyrics' section

The next three poems we include have an obvious link through their subject matter. We do know that the middle of these three is specifically about the 'Garden of Sleep' at Sidestrand, the tower and graveyard that stood on the clifftop when Scott first visited in 1883; it seems reasonable that he used the inspiration of this setting for all three poems. The middle one became the best known and was set to music by Isidore de Lara. 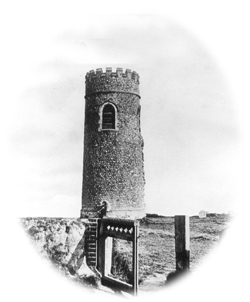 One night can you remember,
The last of white December,
When love relit the ember
That time was burning low;
Once more in soul united,
The moon above us lighted The tower where we plighted
Our faith of long ago.

Oh! sad forgotten tower!
Thou hast the peace and power,
To tell the storms that shower
Across thy sister sea.
Look downward, and behold us
What mysteries infold us,
Thou promised love, and told us
The present-and to be!

The present, we have felt it,
In flower time we've smelt it,
In agony we've knelt it
Bear witness if we lie;
Spring's primrose gives its kisses
To summer's cheek; Earth misses
Its sun, and winter hisses
The wail--Eternity

The future ! Hear us praying,
Here where the world seems staying,
Give love with no gainsaying,
Give hope that cannot cease!
If not, to her give pleasure,
Joy, blessings, without measure;
For me - reserve thy treasure
Under thy grasses - Peace!

THE GARDEN OF SLEEP 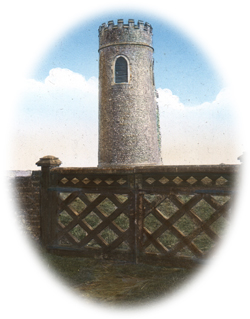 In my garden of sleep, where red poppies are spread,
I wait for the living, alone with the dead!
For a tower in ruins stands guard o'er the deep,
At whose feet are green graves of dear women asleep
Did they love as I love, when they lived by the sea
Did they wait as I wait for the days that may be
Was it hope or fulfilling that entered each breast,
Ere death gave release, and the poppies gave rest?
O life of my life ! on the cliffs by the sea,
By the graves in the grass, I am waiting for thee!
Sleep! Sleep!
In the dews by the Deep!
Sleep, my Poppy-Land!
Sleep!


THE TOWER BY THE SEA

'Neath the cliffs the ships are sailing,
Women watch them joyfully;
But the wind comes wailing - wailing,
Round our Tower by the sea.

The past and present mingle
In a sigh of deep regret,
For at last the twain are single,
And the sun of love has set.
'Tis rough the way we wended,
There are clouds across the sun,
For the sowing-time is ended,
And the reaping has begun.

Life and love - how unavailing!
In the grass they'll bury me.
Breathe a pray'r when winds are wailing
Round our Tower by the sea.

We come now to some verses which are specific to Cromer and the area, both in their titles and in the verses. However, we feel that the quality of the verse takes quite a dive - "whiffs", "piffs" and "cliffs" leave a rather uncomfortable feeling as rhymes. 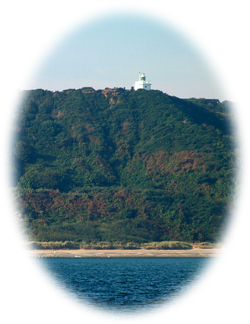 I cannot confess to an envious minute
Since first this village I came across,
For the sea-sick traveller can't be in it
With the usual gambol of pitch-and-toss!
I wouldn't exchange your Pontresinas,
Your Alpine valleys, and castled Rhine,
For my morning "weed" from a box of "Finas,"
And a drink of air that has strength like wine.
The cosiest corner for holiday whiffs
Is found in a hollow of Cromer Cliffs!

I can see them rushing in tourist fashion
In desperate hurry by midnight train,
With fever, and fret, and dust, and passion,
To mountain mists and the Rhigi rain;
From Spa to Spa they will pass and follow
The crowds that hunt in Royalty's wake,
But it grieves not me as I watch the swallow,
And watch the wheat that the breezes shake.
If you'd all be free from tourists' tiffs,
You would sleep off care on the Cromer Cliffs.

They will tear with a guide through an ancient city,
And faithfully "do" a cathedral town;
They will climb their peaks, and - more's the pity
Directly they're up they must needs come down;
They will bargain hard for a dirty dwelling,
On the coast of France in a fisherman's cot,
To hurry back quick to their homes, and telling
They've managed to see what their friends have not.
If they only could hear the "poohs" and piffs"
Of the elderly cynic on Cromer Cliffs!

I can only hear, if I pause to listen,
The sweep of scythe through the falling corn;
I can only see how the sun can glisten
Its dewdrop tears in the fields at morn;
I can only know that I lie in clover
On the top of the down and in sight of the sea ;
I can only wish each obstinate rover
Were half as happy as I can be.
So put in your pocket your " ahs" and "ifs,"
And come and get brown upon Cromer Cliffs!

TO THE AUTHOR OF "A MIDSUMMER HOLIDAY."

O Master, sing of love ! Thou hast the heart,
For thou hast told of daytime and of death!
Thou hast shed tears for lovers that depart,
Awaiting time that saith and gainsayeth.
Sing of immortal love! inhabiting
Our rose-girt cottage shadowed by the mill;
Go forth into our moonlight once, and sing
Of life, of love, of God's triumphant will!

Having been somewhat "iffy" about some of the poems, we include this next as perhaps the best pf Scott's verse. It carries the air of deep emotion and avoids uncomfortable rhymes: are we reading the words of a man who has met "The Maid of the Mill" at Sidestrand?

Two in a boat on the turn of the tide ;
Two in the sight of the leaf and the land;
Two on the breast of the waves that are wide ;
Two on the narrow gold strip of the sand.
But one on the ocean of love and at rest;
One midst the rush, and one in the roar;
One like a bird winging home to its nest
Who asks as much, or dare hunger for more?