Cromer's Roll of Honour in the Second World War

We'd vey much like your help. Can you help us with the listings of Cromer residents and servicemen and women killed in the Second World War? Some will be old enough to remember them, some will know about them as parents, grandparents or great-grandparents. We'd very much like to add any information you have onto this site. Go to the bottom of this page and click on the appropriate buttons to see the listings. On VE day in May 2020 there will be a special display outside the church to their memory and as part of that, we'd like to be able to tell something of their story.

To help, go to the Feedback page on the bottom left of your screen, click on the line for 'Details of WWI or WW2 personnel' and put in such information as you wish. If you can supply photographs, please let us know and we'll contact you about them. 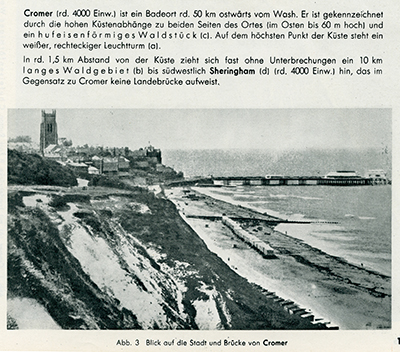 A page from a Luftwaffe manual of British towns and targets

The Norfolk towns of Cromer, Sheringham and Great Yarmouth were in effect front line towns in the Second World War. As well as providing many of their young men and women to serve in the armed forces, they also suffered direct attacks from bombing. Cromer suffered three main bombing attacks and several smaller-scale raids, including machine gunning.

One of the issues for Cromer was that its pier and its church tower made it easily identifiable. In the earlier part of World War Two, it lay on the route for enemy bombers attacking cities in the Midlands and a place to dump bombs on their return journey. In the latter part of the conflict, as the British and USAAF forces gained control of the skies, it became an assembly point, particularly for hundreds of USAAF bombers as they congregated from the East Anglian airfields prior to making their attacks. 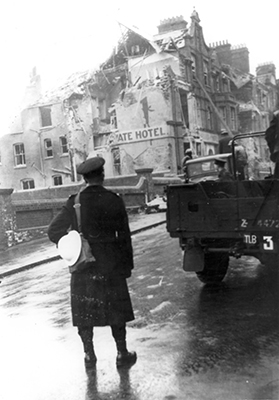 For the present our listings linked from this page carry just the names of Cromer men and women who lost their lives during the course of the conflict, either serving in the forces or as civilians in town. We will be very pleased to have any further information or amendments from families who would like to add to what we have here. 2020 is 75 years on from VE day in 1945, which signified the victory of Britain and its allies over the Nazi forces in Europe; it would be a further few weeks before final victory in the Far East and an understanding of the Cromer men serving or killed in that area of conflict. The fact that so many men of the Norfolk Regiment had been taken as prisoners of war at the fall of Singapore made it a particuarly poignant time for the town.

We have on this page a photograph of the damage to the Lyndhurst Hotel after the raid of April 11th, 1941. The hotel, at the bottom of Alfred Road on the east side, was destroyed, along with No. 7. The elderly Mr Jillings was pulled from the wreckage but died of his injuries a few days later. A serviceman or some servicemen living at the hotel were killed; we have no record of names of these soldiers. 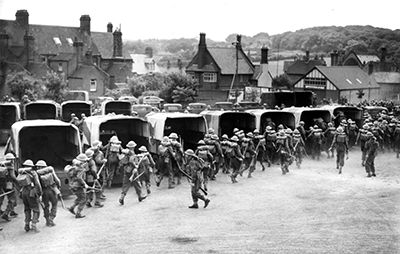 The Beds and Herts at the Cadogan Road car park

The picture of members of the Bedfordshire and Hertfordshire Regiment boarding their trucks prior to an excercise on the east cliffs and golf course is a reminder of the number who were stationed in the town and district. The Royal Artillery manned the guns positioned on the east cliffs; they were replaced by Home Guard forces later in the war.

You can find all those whose names are on the Roll of Honour for Cromer by clicking . There is a slight discrepancy betweeen the names on the Roll and those that appear on the memorial in the churchyard.